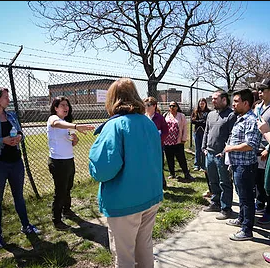 Even when speeding along by train or car, people traveling through Newark, New Jersey, know it by their noses. “No one expects New Jersey, especially North Jersey, to smell good,” says Newark resident and activist Melissa Miles, only half jokingly. “You know, certain aspects of life here, like a huge tower belching smoke—it’s just part of the landscape.”

Whether it’s trash trucked in from New York City or brand-new goods on a container ship from Shanghai, consumer material in all phases of its life cycle comes to Newark—through its international airport or enormous port, its countless warehouses, or the trash incinerator that burns nearly a million tons of garbage each year. Meanwhile, within the tangle of highways, railways, runways, and seaports that make up the infrastructure backbone of the greater Northeast live the residents of the city’s Ironbound neighborhood. Surrounded by much of Newark’s heavy industry, many in the community—which is predominantly composed of immigrants (and their descendants) from Portugal, Brazil and Latin America, as well as African Americans—struggle to breathe.

Miles lived in the Ironbound for a decade before she started to recognize its environmental issues. In 2013, her oldest son, then just a year old, was diagnosed with asthma—a condition that affects one in four Newark children, hospitalizes them at 30 times the national rate, and is a leading cause of the city’s chronic school absenteeism.

“When, for the first time, you have to take your kid to the hospital because they can’t breathe, your life changes,” says Miles, who is the environmental justice manager for the Ironbound Community Corporation (ICC), a grassroots group dedicated to uplifting the community. “After all that, my priorities changed.”

“First it became about getting out of here, but then I realized there really weren’t many places I could go where I wasn’t going to have to face social justice issues,” adds Miles. “We know that the color of your skin and your income pretty much determine how close you’re going to live to pollution. That wasn’t changing, and so I decided that this was the place that I needed to make a stand for my kid and for other kids.”